OUT with the old, in with the new

Sarasota County is adopting a new textbook for English class. Here's everything you need to know about the Textbook Adoption Program.

Sarasota County is once again adopting new textbooks. Many of you may not know anything about this program, you may not have heard of it before, but a textbook is being decided on this year to update the textbook with the standards. This is done usually every five years. Here is the interview of Thursday, January 7, 2021 where I (KP), asked questions on this program to an English teacher, Ms. Kennedy. Here is the interview. 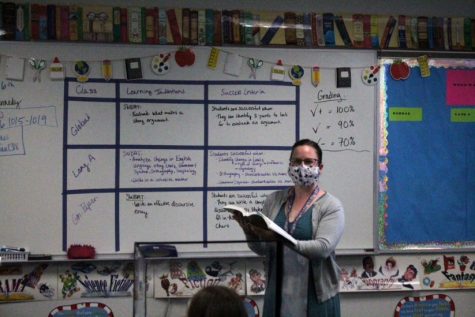 KP: So the Textbook Adoption Program, what is it?

Ms. Kennedy: Every five or so years the state gives the school district money to invest into a new textbook. I suppose this year’s been more than seven years since we’ve adopted textbooks for English language so I suppose we had the funds for it, and the district gave us four finalists, so I suppose they must have went through a few of them so now we’re going through the four finalists, the publishers, and kind of seeing what’s going to be the best fit for North Port High and Sarasota County. We will debate that later, and then we will be using those textbooks for the next 5 plus years.

KP: Are we the only school who does it, or is Sarasota County the only county who does this?

Ms. Kennedy: I am not sure. I know this year is Sarasota County’s turn, but I am not sure if the state divies out the funds per area of Florida or what not, that is a good question. I do not know. I am sure the state funds more than one district a year, but I suppose we are lucky this year.

KP: How often is this?

Ms. Kennedy: I think ideally it is every five years but I think recently the head and the district said that it was seven years. But ideally it is five—five to sevenish.

KP: Who provides these textbooks?

Ms. Kennedy: We have four different publishers. We have McGraw Hill, Public Consulting Group, Savvas, which used to be Pearson, and the Houghlin Mifflin Harcourt publisher, and we are choosing between those four.

KP: Do these textbooks come in different languages, or are they just in English?

Ms. Kennedy: They are just in English. That is a good question. They do come with supports for English language learners, as well as different 504 and special ed adaptabilities, so that is another thing we have to look at is what is going to work best for those student populations.

KP: Is there an audio option?

KP: How do you decide which textbook to adopt?

Ms. Kennedy: Right now all the textbooks are at the high school and I put the textbooks in the English Planning Room up in 8219. I let all the English teachers know what was there and what to look for and things that make a good textbook to a bad textbook, especially with standards and different focuses and things of that sort. I asked the English teachers to let me and the other textbook committee teachers know how they felt about the book and then I am going to ask the textbook committee members to look through the books closely and tell me what they think, and then I take everybody’s opinion and put it in.

KP: Is there a committee who decides which textbook to adopt?

Ms. Kennedy: Yes, there is a committee. Each high school or school has a committee and we have a meeting with the head library textbook district person, liazon, and we are going to meet via Zoom at the end of the month and debate which textbook is going to be the best for us and the county, and kind of come to a consensus. We are kind of going to rate the books 1 to 4 so that way we will not get our way with option 1; we have a backup for Option 2.

KP: What types of English books do you use?

Ms. Kennedy: Normally I would use a textbook. What we have now has kind of like a workbook with short stories in it, so I use that. Sometimes, I find short stories that I like that works with the standards, but maybe not so much in the book or the textbook. So I find those Commonlets, that is a good source.

KP: I know. Sometimes the textbook stories are boring.

Ms. Kennedy: Yes, more interesting stories, more relatable stories for the students. Yes, that is definitely key—so it is more relatable to the student population rather than something that I read in high school. We do not want an outdated story. Every so often it is okay.

KP: Are they for the whole English department?

Ms. Kennedy: Not in the whole state of Florida. I do not think the state can afford that. It is kind of just each district can adapt what they like as long as it goes with the standards.

KP: When do you decide what book to adopt?

Ms. Kennedy: We are having the final, all the committees are gathering January 28th to debate which textbook is going to be the best for us and the next day or the next week I think, they are going to adopt the textbook that we suggest hopefully.

KP: Do you have to pay for these textbooks?

Ms. Kennedy: No, luckily it is public school. They are free. Based on what the state as well as what the district pays.

KP: What do you do with the old textbooks when you are done with them?

Ms. Kennedy: The old textbooks are returned to the district and then I hope they recycle.

KP: I think it would be cool to give the textbooks to the students, but I did not know if that is what you did or if you just kept them because they were the old textbooks.

Ms. Kennedy: That is a good question. Probably one or two as a reference.

KP: Is the Textbook Adoption Program TAP as an acronym?

Ms. Kennedy: I mean, we can adopt that acronym. I do not see anything wrong with that. We just call ourselves textbook committees. We can say TAP for sure.

KP: We can adopt the adoption acronym! 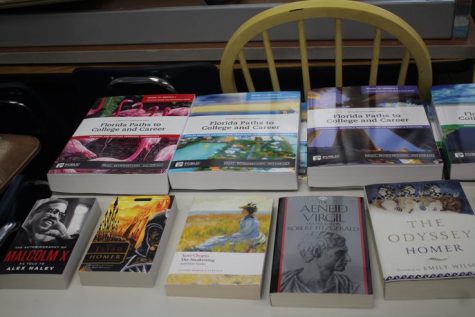