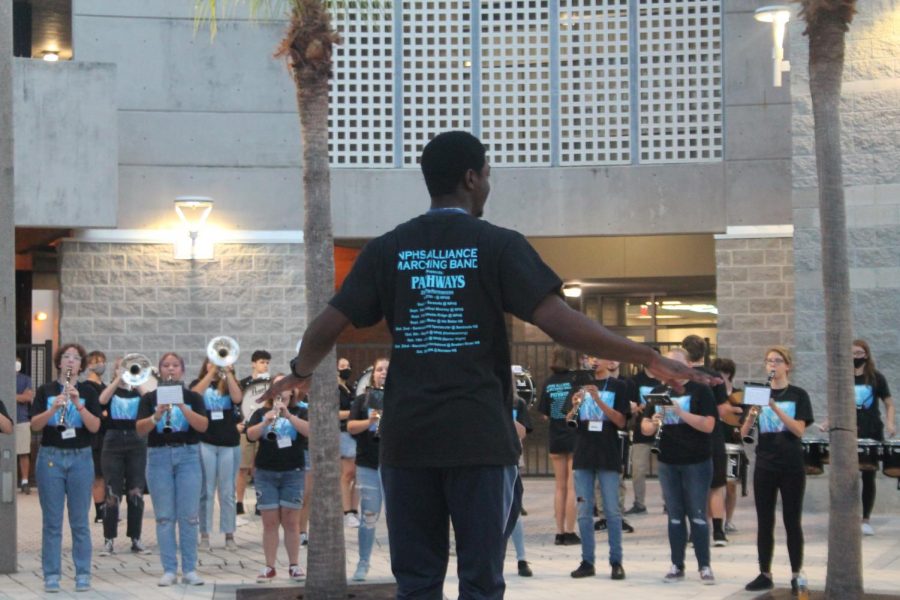 On Friday, August 27th our school’s cheer team and marching band came out to show their bobcat pride. The band lined up around the circle of trees with the cheerleaders to the right behind them. The band played a wide variety of songs from the War Chant to Never Gonna Give You Up. Fireball was Natalie Taylors (clarinetist) favorite song to play, “The energy is so positive,” she said. The cheerleaders did several stunts as well including aerial cartwheels, flyers holding up signs while being held up, and heel stretches. Regarding the performance Alitta Bacso a side base said, “It was really fun, and the band plays really good.” The cheer teams did have a few members absent do to being quarantined. Brianna Guin a flyer on the team says, “I think we did really good, we haven’t had our full team yet cause of COVID so right now we’re not at our full potential, but we did very good.”

Morning music is a great way to start to start your day off on a positive note and show your bobcat pride. The band and cheer team are very grateful for the people that do go watch them. To the people who would like to join the band Sophia Singh says, “be hard working and be a real team player, you will get stuff done and you will enjoy what you’re doing”. To the people who’d like to join the cheer team Brianna Guin says,  “have some experience before like try it out watch some videos and stuff because there’s so many different things in cheer people didn’t know and it’s not always how it seems, standing on the sidelines and cheering like most people think”

On Saturday, August 21, the NPHS Alliance Marching Band performed at a Zumbathon to help raise money for their organization. Zumba is a form of fitness, where people work out through dancing. It is typically to Latin American dance music, as that is what Zumba is based on. One of the band parents, Ms. Cascante, helped make the day possible by providing the Zumba lesson. All funds from the event went directly to the band to help purchase props and equipment for their 2021 marching show, “Pathways.”

The event was held at Tringali Park Recreation Center at 11:00 am. The band and color guard got there early, which allowed them to warm up. After warming up and getting hyped and excited, they marched into the gymnasium to play for the Zumba participants, to get them excited and ready to go. The band played most of their stand’s tunes, including Apache, Never Gonna Give You Up, Land of 1000, Sequence 3, and more. The audience were cheering and dancing along, with everyone having a great time. “I liked doing the dances and just having fun with everyone,” explained front ensemble and cymbal line member Hayley Smith. Overall, everyone had an amazing time, and the band earned all the money they were hoping for and more.

Overall, there was an amazing turnout for the event, with many parents and Zumba members supporting the band. The Alliance achieved their goal, not only financially but socially as well, getting all the participants excited, awake, and ready to go. The band hopes to continue to go out in the community and perform, to help bring joy to people and have fun.