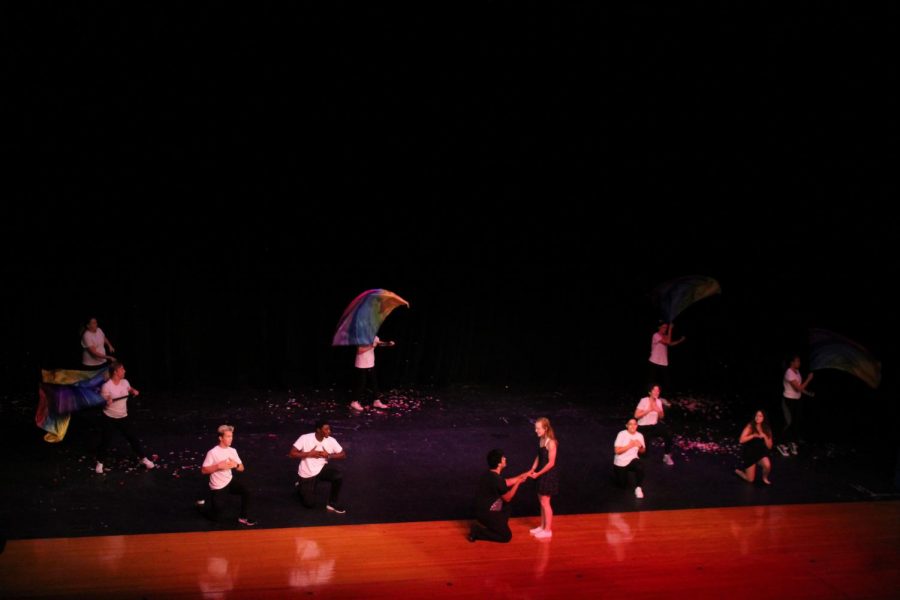 The annual lip sync has come around once again, this time with more energy, creativity, and talent! Hosted by a comedic duo Emma Cooley and Lily (sophomores), the lip sync’s this year was a successful night full of music and dancing from 8 performances all with different themes and stories. It lasted for about an hour, ending with the top 3 performance groups that had reached the hearts of the judges, and the audience.

The first performance was by 4 members from the Thespian Troupe 6328, who did a mash-up combining iconic songs and audios such as ‘My Shot’ from Hamilton, ‘Cruisin’ for a bruisin’ from Teen Beach Movie, and the ‘Berries and Cream’ Tiktok audio. Next up was the performance by True Colors, consisting of the song ‘Material Girl’ by Madonna, which was set up as a singing competition by two girls. Unfortunately, while the sophomore group did drop out last-minute, the Junior SGA (Student Government Association) fired up by performing several dances and songs from the video game ‘Just Dance,’ the idea of it being a dance battle between two groups. Some members part of the lip sync included Sabrina Schmitt, Aakash Singh, Stade Jean, and Katelyn Lewis. The reason why SGA participated in the lip sync was to “show our school spirit as the Junior class,” said Katelyn Lewis. “It was a lot of fun to put together as well.” Additionally, Stade Jean added on that “It made everyone have their own personality.” He explains that their battle was meant to represent the class of 2023, being “dysfunctional and all over the place.”

The Marching Bands’ performance caught the attention of the Swifties in the room. Songs such as ‘Love Story’ and ‘Look what you made me do’ was put in a performance about love, heartbreak, and tragedy with student Joel Thame as part of the main storyline. Halfway through the night, a tap-dancing duo filled the stage with a dance break, along the song ‘Put on a happy face’. Following that, the Seniors’ Lady Gaga performance with ‘Paparazzi’ brought out their love for the artist, and wanted to represent her in their lip sync. Frozen popped up as one of the performances, the song ‘Love is an open door’ popping up as a duet performance. Last, but certainly not least, staff from North Port High participated in a rock style lip sync performance with Ms. Henderson, the theatre teacher, joined by the hosts of the show.

In the end while it was a competition, every performance that night was outstanding with all the participants giving their best in their battles. Overall, the 2021 lip sync was an absolute success, with True Colors in 3rd place, juniors in 2nd, and Seniors in 1st.