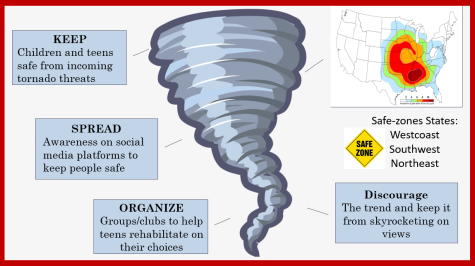 On Tuesday, March 29th, 2022, North Port High School student Toto Dorothy suffered the consequences of collision with a natural disaster, specifically a tornado. Dorothy skipped school Wednesday according to peers and was last seen at Siesta Key Beach with his friends in Sarasota, Florida. One of the friends, who requested to remain anonymous, tells local news Dorothy spotted the tornado in the near distance, and while they advised against it, Dorothy proceeded to grab his surfboard and race to surf the tornado.

A missing person report was issued Tuesday afternoon and the following day, March 30th, 2022, Toto Dorothy was found in Wamego, Kansas by a local resident, Glinda Gale. He was found conscious with only a few scrapes on the legs. Gale called authorities, then Dorothy was rushed to an emergency room and paramedics claimed Dorothy was in a “healthy condition and unharmed.”

When released from the emergency room, Toto Dorothy took his supernatural experience to social media, sharing his “thrilling” involvement in creating a new trend called ‘Tornado Surfing.’ His experience went viral among platforms such as Instagram and Tik Tok, inspiring youth to give a try at this dangerous new trend of ‘Tornado Surfing.’ Teens are going to the extreme, traveling to the infamous Tornado Alley with surfboards, awaiting the next ride. Additionally, an organization has formed from Tornado Surfing’s appearance on the internet. The organization has been speculated to be contacting teens in the Sarasota County area, asking for funding for the organization to help provide surfboards for interested Tornado Surfers.

If one encounters a potential surfer, strongly advise them against it. Support groups are being created to help children resist the urge to try or continue partaking in Tornado Surfing. Additionally, the west coast of the United States has been labeled by professionals as a “safe zone” for residents to live free from tornados. If you are worried about a loved one engaging with this trend, the government is advising people to move to the west. Help put a stop to this newfound trend, and keep our youth safe by spreading awareness, and looking out for each other.